Enjoy a Bowl of Matcha in Kanuntei Teahouse

Kanuntei Teahouse was built in 1893 by order of the 37th head of the Matsura family, Matsura Akira (Shingetsu). It is a pure and simple sōan (grass hermitage) style tearoom based on the original ideas of tea master Sen no Rikyu. The teahouse incorporates unpretentious building techniques of a rural farm house and is almost entirely made of natural materials. The original building collapsed during a typhoon in 1987 but was carefully reconstructed in its original form.  At the Kanuntei teahouse you can enjoy a bowl of matcha tea prepared according to the Chinshin style of tea. It is served with a traditional sweet from Hirado, a choice between Ubatama or Casdous. 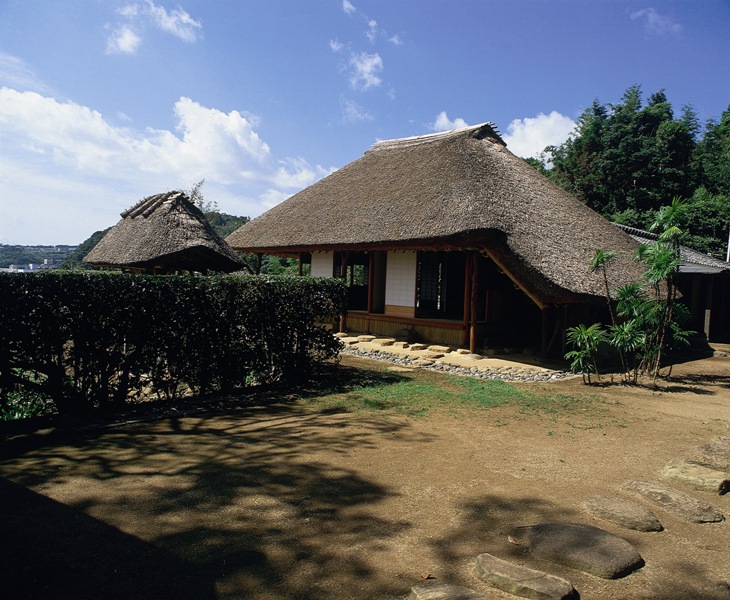 in School of Tea was founded by the 29th head of the family, Matsura Shigenobu (Tenshō). Shigenobu wrote in ‘The Origin of the Tea Ceremony’ that: `samurai should be accomplished in both the literary and military arts and the way of the tea is a refined way to train in both. One should not aim for softness but for strength and beauty`. During the Edo period (1603-1868) it was mainly practiced among samurai as a warrior style tea ceremony. After the Meiji restoration in 1868, the 37th head of the family, Matsura Akira (Shingetsu) helped to promote the way of tea and taught the daughters of the imperial family.

In 1841, the 35th head of the family, Matsura Hiromu, ordered two old sweet shops, Tsutaya and Sakaiya, to make 100 different types of sweets. After six years of hard work they completed the series of 100 sweets. Vivid drawings as well as their names and recipes were compiled into `The Encyclopedia of 100 Sweets`. Ubatama was one of those sweets and has been revived again for you to enjoy at the Kanuntei teahouse.