Inō Tadataka was the first surveyor in Japan who made accurate maps. In December 1812 he started surveying the Hirado domain. The lord of Hirado at the time, Matsura Kiyoshi (Seizan) 34th head of the Matsura family, made a secret arrangement with Inō Tadataka to receive copies of the maps so he could study the exact topography of his domain. Inō Tadataka started at the southern tip of the domain at Hario Island (now the southern part of Sasebo city) on December 8th. In October 1813 he surveyed the 99 islands (now part of Saikai National Park) and on January 29, 1814 he moved on to Hirado island. 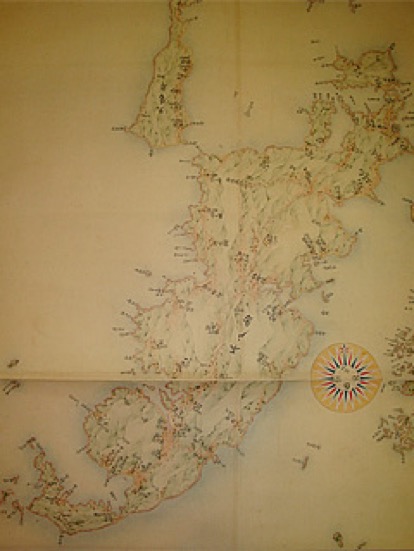 During the surveying of Hirado Island, Matsura Hiromu, the 35th head of the family who was in Hirado at the time, went to see how they worked at Mount Shiratake, in the north of Hirado. Since the Hirado domain had an extremely long coastline, of which the 99 islands are a good example, it took over three months to survey the island. In 1818 Inō Tadataka passed away without being able to fulfill his promise to give the maps to the Matsura family.

However, the maps of the Hirado domain were completed by the students of Inō Tadataka in 1821. They were given to the Matsura family by Takahashi Kageyasu the official astronomer of the Bakufu government. Takahashi Kageyasu later died in imprisonment due to his role in the Sieboldt incident in which he gave Sieboldt copies of Inō’s Japanese maps who tried to illegally take them out of Japan. Despite this, Matsura Kiyoshi (Seizan) had sympathy for Takahashi till the end as he described in his writings.