Hirado and the trade with the West

In 1550 the first Portuguese ship entered Hirado harbour. From 1553 onwards 1 or 2 ships visited Hirado every year which developed into a bustling trading town. The lord of Hirado, Matsura Takanobu welcomed the Portuguese ships coming to Hirado but did not necessarily have a great fondness of Christianity, so when more and more missionaries came to Hirado it created tensions.

In 1561 these tension were at the source of a dispute between the Portuguese and Japanese merchants about the price of trade goods. Things turned sour and quickly escalated into bloodshed in which 14 people, including the captain of the Portuguese ship were killed. This incident marked the end of direct Portuguese trading in Hirado. 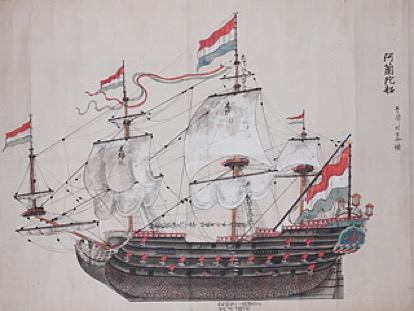 In 1609, two ships from the Dutch East India Company left for Japan. They arrived safely in Hirado and after an audience with Tokugawa Ieyasu in Sunpu (Shizuoka) they received permission to trade and decided to build their trading post in Hirado. The VOC trading post was ordered to move to Dejima in 1641, but the 33 years of trading in Hirado were a very important period in which the Dutch laid the foundations for their long lasting relations with Japan.